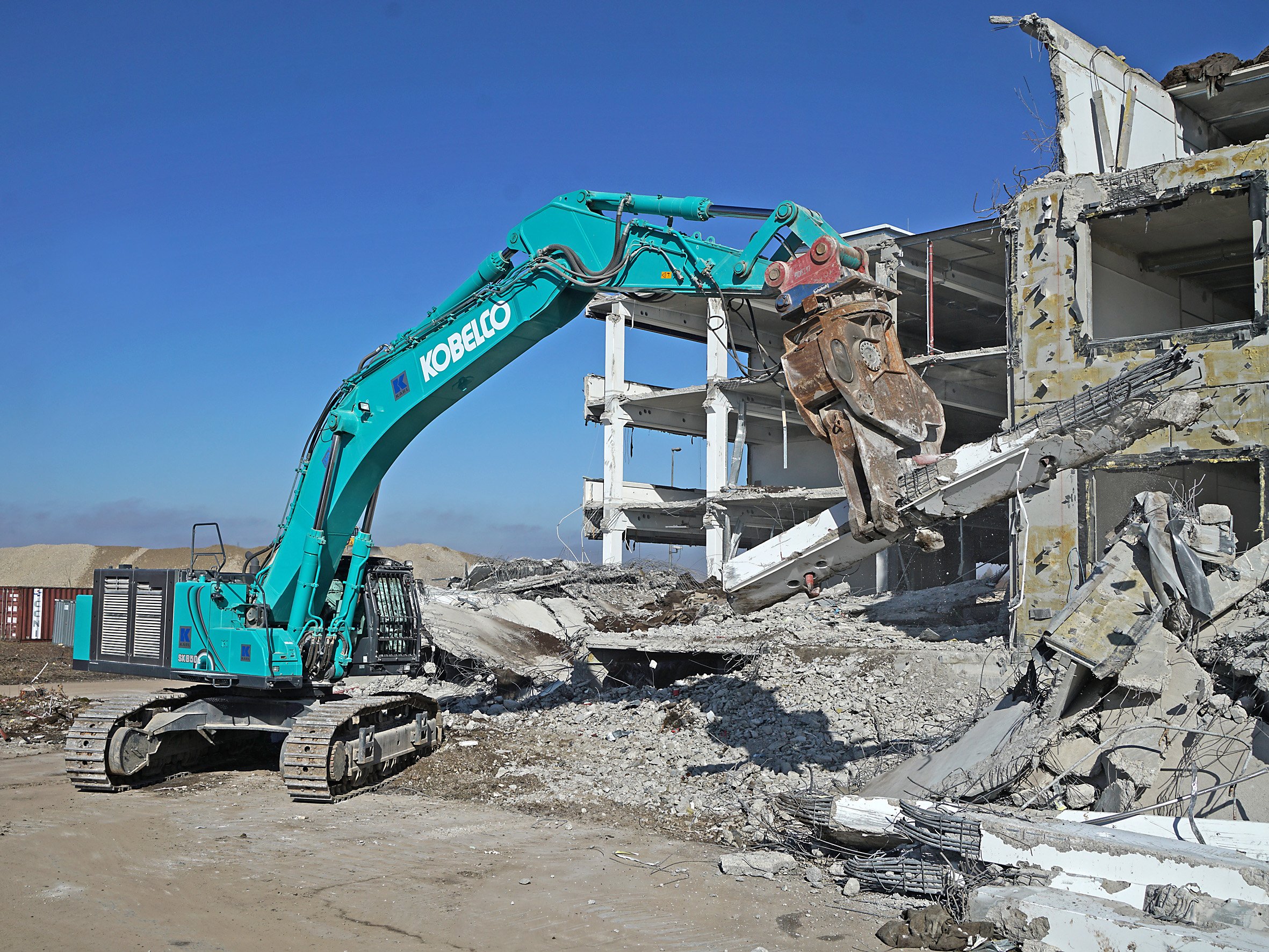 The SK850LC-10E is Kobelco’s giant – the biggest in its European excavator line-up! Driven by a powerful Hino engine, the machine delivers superior strength and performance via an uprated specification of 2,120 Nm of torque and 380 kW of power, and what better way to demonstrate the SK850LC-10E’s mighty power than on a demolition jobsite?

Since January 2020, the Karl Group from Hengersberg near Deggendorf in Germany has been dismantling the former BMW factory in Munich’s Schwabing Freimann district. The major project includes the demolition of around 460,000m³ of building volume, the professional handling of all construction and residual materials as well as the build preparation of the building site for a large scale residential and commercial development. The Kobelco SK850LC-10E joined the Karl Group excavator fleet in June last year – the company now has 35 Kobelco excavators of all sizes on its fleet. The machine was supplied by Kobelco authorised dealer, EMB Baumaschinen.

The Kobelco SK850LC-10E’s main operation is on heavy excavation jobsites, but the machine also works in dismantling with heavy concrete cutters or crushers. Equipped with an 8.25m standard boom and 3.6m arm, the Kobelco giant offers outstanding values ​​on paper that Karl Group’s excavator operator, Franz Bartik, confirms: “Shortly after delivery by EMB, we carried out our own lifting tests – with a good 15 tonnes on the arm and a full reach of 10.5m, the SK850LC-10E was just under 500kg above the factory specifications.”

Although this enables high attachment tool weights from the outset in dismantling practice, a performance-optimised design of the drive and hydraulics is required in order to cope with the enormous power requirements of the concrete cutters or crushers, which can weigh up to 8 tonnes, without restrictions in the work cycles or impacting consumption values.

However, almost more important than the power peaks, are the Kobelco-specific controls for the boom and attachment hydraulics, which specifically avoid unnecessarily large amounts of oil or working pressures. These include, for example, the patented arm interflow system, which supplies the extending arm cylinder directly with oil from the boom cylinder purely through the weight of the lowering boom. In addition, the different working modes of the excavator control, (in addition to the three settings, H-mode, S-mode and Eco-mode), offers up to 20 freely configurable programs for a wide variety of attachments. This allows the operator to reduce the hydraulic pressure when opening the concrete cutters. “Even under full load, the SK850LC-10E swivels and drives precisely and quickly and, as is typical for Kobelco, also allows very sensitive work with a large shovel or cutter,” confirms excavator operator Franz Bartik, who has more than 20 years’ experience with the Karl Group.

“After around 1200 hours of operation, our Kobelco SK850LC presents itself as a very balanced machine concept and impresses with pleasantly low operating costs,” says Günther Karl junior. Together with his father and company founder Günther Karl and his brother André Karl, Günther heads the over 50-year-old group of companies with more than 400 employees in the Germany-wide business areas of construction, energy, real estate and industry. “Even with our heaviest attachments, the 85-tonner consumes only between 44 and 48 l/h, which is very impressive in this class. Also, in terms of reliability, the big Japanese once again fully meets our expectations,” he concludes.

Kobelco’s southern German dealer, EMB Baumaschinen, which is celebrating its 30-year partnership with Kobelco this year, has also played a major role in the preparation of the Kobelco SK850LC-10E for the Karl Group fleet. As with many previous Karl machines, numerous special technical features have also been implemented by EMB, beyond the extensive standard and additional equipment Kobelco SK850LC-10E. The almost three-month customisation at the EMB location in Neukirchen included, among others, the driver-friendly tilt function of the original cab, the installation of additional pressure compensators for even more controlled hydraulic management and the equipment with an onboard compressor.

The delivery of the second Kobelco SK850LC-10E to the Karl Group is planned for July 2021. In addition to the customer-specific modifications, this new machine will include a 5.4m additional arm, which further increases the reach and working height of the machine.